They Served Our Country. Today, They Serve Our Students.

Jack Bell - the dean of students at McGlone Academy - smiles while showing photos of hot air balloons to his students. Click on the image above to watch our video honoring veterans who now serve our classrooms and schools

There are more than 50 employees in Denver Public Schools who self-identify as a veteran, and we thank each of them for their incredible service to both our country and our classrooms. Watch our special Veterans Day video honoring our Team DPS veterans!

At McGlone Academy, 72-year-old Jack Bell serves as dean of students in ECE through 2nd grade.

Bell joined the Air Force after high school, serving four years between time in Japan and Vietnam. During that time, he intercepted morse code, called in air strikes, and spent 14 months on a C-47. He flew 135 missions in Vietnam, earned the distinguished flying cross, and was an instructor to other service-members.

“We had people who were petrified to be in Vietnam and didn’t sleep at night. So, you really had to be an ear for those kids and had to make sure [we] understood where they were coming from. How to talk to them, how to advocate for them,” Bell said.

Today, Bell does that advocacy for students, monitoring their behavior and guiding them back to the classroom when they are struggling.

“I like kids that are looking for that adult in their life. I want to be that adult,” Bell said. “I gave service to the country. Right now, I give service to the kids. I don’t think I could do that anywhere else but in Montbello.”

A few miles away in Green Valley Ranch, Pete Adam – who served in the Marines in Okinawa just before Vietnam – teaches as a long-term substitute teacher at Legacy Options High School.

“The Marine Corps was really my father. I never had one since I was three,” Adam said. “So that was what trained me into getting myself together.”

Adam became an educator shortly after returning from his tour of duty, drawn to teaching students who reminded him of how he used to be: at a higher risk of dropping out before graduation. 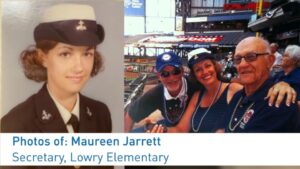 Maureen Jarrett – a Secretary II at Lowry Elementary – also shared her story of service with us in an email:

“I joined the Navy right out of High School. My dad, who was a Commander in the Naval Reserves swore me in.

“I went to boot camp in Orlando, FL (first time on an airplane!) and then spent two years on the East coast and two years on the West Coast. Two years was spent in training – Hospital Corps School and Physical / Occupational Therapy School in Bethesda, Maryland and then to California.

“I ended up in Physical Therapy Department at Balboa Hospital in San Diego. It was an exciting time for 18-22 year old me! I drove cross-country by myself several times. I witnessed the last POWs from Vietnam return home.

“I drove an ambulance with the Commander of the base from Lemoore Naval Air Station up to Oakland, CA and I was Miss Armed Forces for a week in Milwaukee!”