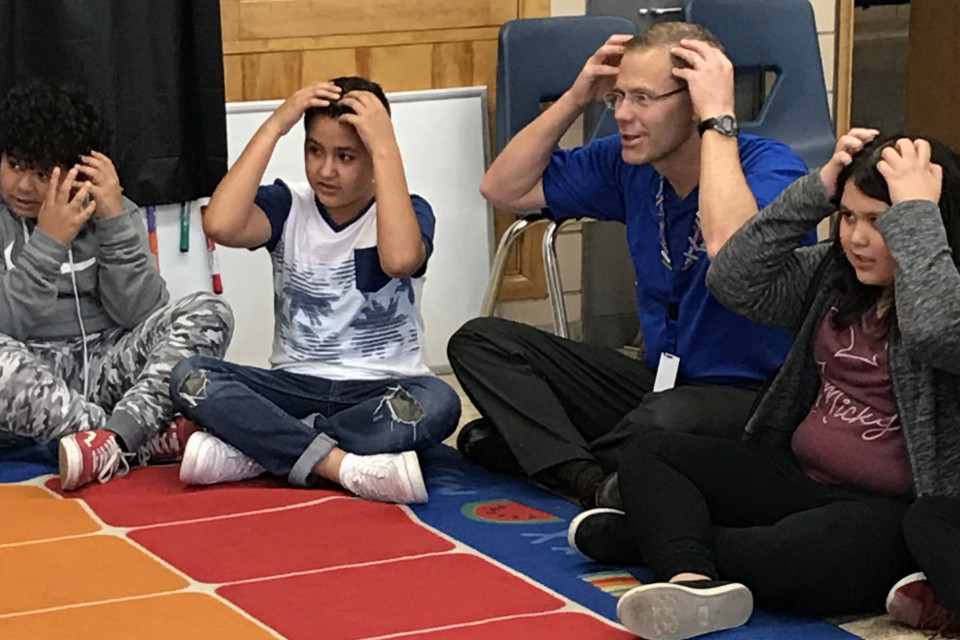 Superintendent Tom Boasberg visited Jill Curnow’s multi-intensive primary class at Sabin World School on May 9. He was warmly welcomed by the students and joined them for breakfast. When the class moved into individual activities, Tom worked one-on-one with a student practicing numbers. Before he left, Tom helped two kids put together a puzzle. It was a treat to start the morning in Jill’s class!

Superintendent Tom Boasberg visited Moose Mamet’s drama class at Kunsmiller Creative Arts Academy on May 9. The class practiced Macbeth in Spanish and asked Tom to play a part in a few scenes. The students transitioned to preform improve, when they were instructed to use a pretend language while acting out skits. Tom helped student get into character when he pretended to be a kid at the grocery store. The visit was energizing and FUN!

Superintendent Tom Boasberg visited Kristin McCandless’ third-grade math class at Gust Elementary on May 9. He helped students learn shapes by pointing out objects we see every day. After, the students transitioned to play shape Bingo in small groups. At the end, Tom had the opportunity to talk with students about what they would give their teachers — with a trip to Hawaii coming out on top!

On May 9, Deputy Superintendent Susana Cordova stopped by Lake International School to lend a hand in teacher Beth Douma’s history class. “I was a teacher, and I know how hard teaching can be,” Susana shared with the class. “I wanted to take some time to say thank you to Ms. Douma and all our teachers for what they do.” Susana led the eighth-graders in a lesson on slavery and abolitionists, including listening to quotes set to rap by Abraham Lincoln and Fredrick Douglass. Later, the students discussed in groups what these quotes mean and what’s similar and different between the two.

It was all fun and games – or at least the lesson of the day was – when Deputy Superintendent Susana Cordova joined Arielle Walker’s class at Barnum Elementary to help students research playground equipment. Susana and Ms. Walker co-led a lesson that asked the fourth-graders to decide what playground equipment they would want, then research prices and find the average cost for each item. The class was abuzz with energy as they went through the process of building their dream playgrounds. Susana also shared with the class memories of her time as a student at Barnum, and she even held the class’ bearded dragon Rocky!