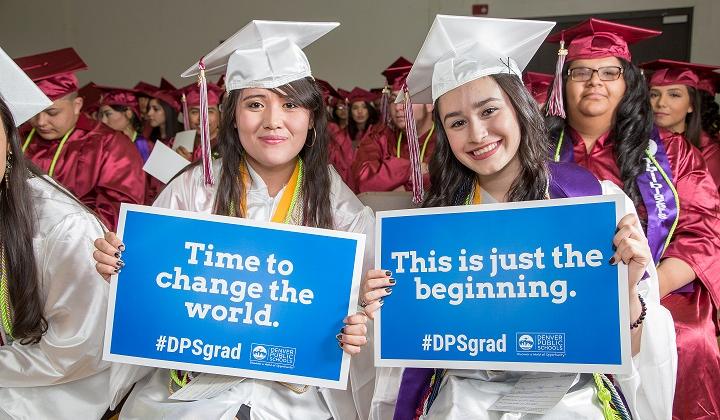 “Thousands more kids are staying in school and moving forward toward graduating ready for college, career and life.”

In what used to be one of our lowest-performing middle schools, four passionate high school students this week helped celebrate a 100% graduation rate in the now thriving Kunsmiller Creative Arts Academy (KCAA).

“The art curriculum at Kunsmiller has helped influence my drive to go to college,” said KCAA student Kya Butterfield, standing beside a vivid landscape of his own design. “My creative mindset will help me in my future career in quantum mechanics.”

KCAA is a shining example of what’s possible when a decision to close a long-struggling school is met by a community excited to help build a school their kids deserve. In 2007, Kunsmiller Middle School began to phase out its program and, in 2009, a K-12 school with an arts-enriched curriculum opened its doors.

Thursday, when the Colorado Department of Education released graduation, completion and dropout data for 2015-16, I joined students, educators and community members at the school in Southwest Denver to thank them for their incredible efforts and to congratulate them on a perfect graduation rate. This “on-time” graduation rate looks at all the students who started at KCAA four years ago as freshmen to see if they have graduated within four years.

“Last year, every single one of our students who started with us as freshmen four years ago graduated,” said KCAA Executive Principal Peter Castillo, citing a focus on ensuring students are ready every year to move forward. “Currently, our entire high school is on track to graduate.”

The success we’re seeing at Kunsmiller is being replicated across the region and throughout our district.

Consider that Southwest Denver high schools graduated 562 students in 2011-12; by last spring, that number had increased nearly 40% to 781 graduates.

We see that same story throughout our city. In the eight years since the state began tracking the four-year or “on-time” graduate rate, DPS has seen greater gains than any other school district in our state:

This means thousands more kids are staying in school and moving forward toward graduating ready for college, career and life. Our vision is Every Child Succeeds, meaning that every young person graduates ready for college and career.

Overwhelmingly, the credit for the success we’re seeing, at KCAA, in Southwest Denver and across our district, goes to the extraordinarily talented and caring educators who work so hard to support each and every student we have the privilege of serving in DPS.

Click here to read the the full edition of Our DPS Weekly: Lots More Caps and Gowns