Our DPS Weekly: Graduation Reflections from the Class of 2019 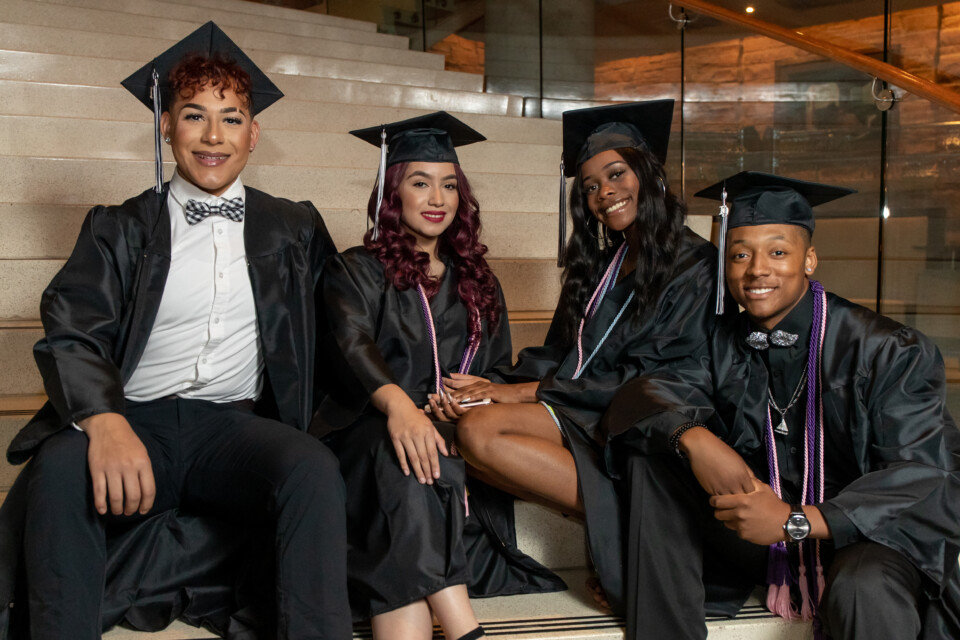 “Congratulations to all of this year’s graduates, their families, and the teachers, coaches, counselors and leaders who helped them every step of the way.”

Fifteen years ago, I dropped off my small three-year old daughter for her first day at Denison Montessori School. I remember how it felt to watch her walk across the threshold of the classroom. She shyly stepped into her classroom, looked at her teacher, Miss Susan, and then nervously looked back at me. She held my hand and only let go when I gave her a little encouragement to move forward on her own.

Congratulations Class of 2019! Watch this Somos! DPS video for a recap of graduations across DPS.

This week, I again watched her step across another threshold — the graduation stage. She is no longer shy or small and she was only a little nervous. I felt the same mix of emotions I did all those years ago — joy, pride and the lump in my throat at experiencing another one of life’s milestones. My daughter, along with so many other sons and daughters in DPS, is moving on to the next step in her journey.

We are at a time of transitions: graduations, continuations and moving from one grade to the next. We celebrate all of our students and their accomplishments. It has especially been a pleasure to cheer on the Class of 2019 at ceremonies across the city. The best part has been listening to the students share their reflections as they graduate:

“You work so hard to get to this one part of your life and it’s a big moment. Your parents, family and friends are proud, and you get to walk across the stage with your best friends. I’m proud of a lot of stuff I did in this school, but mainly proud of the leader I’ve become. I wouldn’t have become this leader without my teachers who have pushed me.”

“I’m very excited; I’m the first to graduate high school in my family. It’s an experience! I think what I’m the most proud of is just getting through it. High school is not an easy stage!”

“As I’m stepping out of childhood and entering into adulthood, it’s going to be exciting to see where I will end up in four years.”

“I’m feeling great. Magnificent. I just graduated!! It’s been twelve long years. It symbolizes a new chapter. It’s so much more than a diploma.”

Our students are graduating prepared for what’s next for them, whether that’s college, military service or going into the workforce. This year’s graduating class has filled out a grand total of 14,408 college applications to date — an average of three per student! Combined, our students have already been awarded an astonishing $91 million in scholarships, with more coming in! And almost 300 members of the Class of 2019 have completed CareerConnect internship experiences, with some students doing several.

Congratulations to all of this year’s graduates, their families, and the educators, leaders, coaches, counselors and support staff who helped them every step of the way. Wherever life takes you next, know that you’ll always have a place in our hearts — and in Team DPS.

Pictured above: Class of 2019 graduates from Collegiate Prep Academy in Far Northeast Denver. 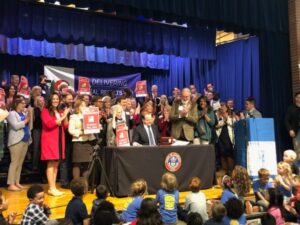 This week, Gov. Jared Polis signed legislation at Stedman Elementary providing free, full-day kindergarten to the families of Denver, and the state of Colorado. If your child will be attending kindergarten in a DPS school beginning in the 2019-20 school year, you will not be charged tuition and no further action is required on your part. Your school will be contacting you this summer regarding registration and back-to-school events.

“We’re so thankful that the governor and legislature prioritized this important work, which positively impacts so many of our families here in DPS,” said Superintendent Susana Cordova.

Free full-day kindergarten has many benefits:

Dr. Martin Luther King Jr. Early College is one of seven schools across the nation that was named a School of Opportunity by The Washington Post. Schools of Opportunity is an annual project, which started in 2014 as a pilot in New York and Colorado. It recognizes high schools that work to close opportunity gaps by creating learning environments that reach every student.

Dr. Martin Luther King Jr. Early College carefully facilitates the ability of its diverse students to earn associate of arts degrees and industry certificates tuition-free through an impressive array of postsecondary partnerships. Creative allocation of resources means that three full-time mental health professionals work on site with counselors and therapists from Denver Health. More than 70% of the school’s students use these and other dental, vision and physician services offered by the school and its partners.

Two students at Munroe Elementary proudly represented their school and DPS at the Colorado State Spanish Spelling Bee on April 13 this year. Hosted by the Colorado Association for Bilingual Education (CABE), the event had participants from across Colorado. Erick Toribio-Rodarte, who is in fifth grade, qualified to go on to the national competition on July 13. Oscar Reyes-Valenzuela, a fourth grader, also participated at the state level.

“Being able to participate in a Spanish-language spelling bee was wonderful for Erick and Oscar,” added Pluta. “We value biliteracy at Munroe and these students were able to do something they could be proud of that connected to their heritage.”

Sgt. Cliff Paine Retires after 17 Years of Service at DPS 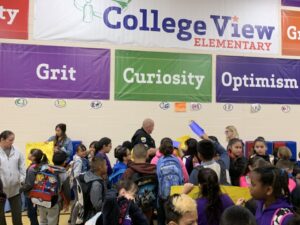 Students from College View Elementary gather around Sgt. Cliff to thank him for serving their school.

Sergeant Cliff Paine, in the DPS Department of Safety, is retiring this week after 17 years of dedicated service to DPS and a long career in both Jeffco Schools Security and the U.S. Air Force. On Saturday, the Department of Safety held a retirement celebration where Denver Police (DPD), DPS school leadership and Denver 911 attended to show their appreciation and gratitude for his service.

On Wednesday morning, the students and staff at College View Elementary held a surprise assembly to celebrate and thank Cliff for his outstanding service to their community. Each student made him a personalized card and gave hugs to show their appreciation.

Cliff Paine has been instrumental in the success of the Department of Safety and has exemplified the DPS Shared Value of Students First. He will be incredibly missed and we wish him a long and fulfilled retirement!

May 29: Special Board of Education Meeting

May 31: Last day of school for most DPS schools

DISCOUNTS: Get tickets to Wicked, Charlie and the Chocolate Factory and more!