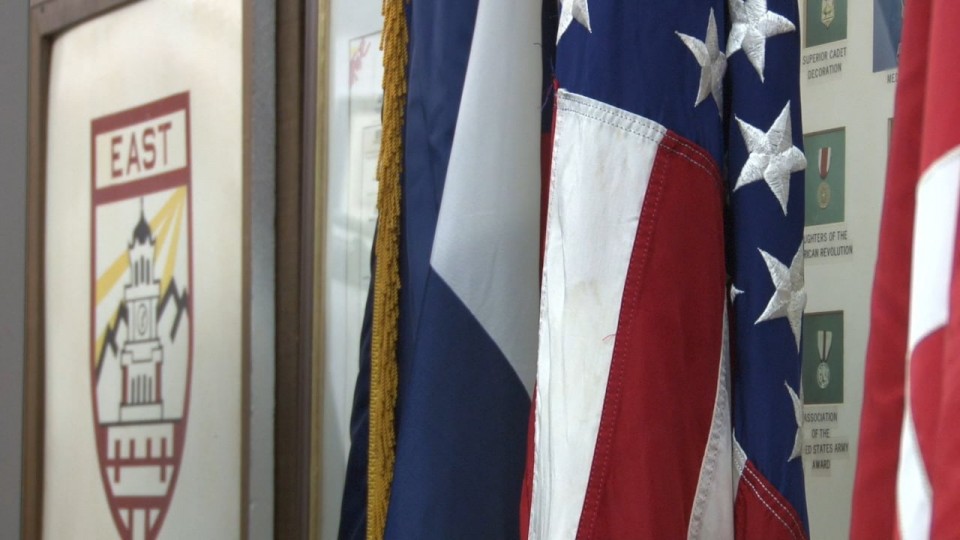 For many students, your first year of high school (as is the case with middle school, or college, or a new job) is about making a name for yourself and carving out your own path.

For Denver East High School Senior Alexis Washut, that meant politely ignoring her mother’s suggestion to join the JROTC. Her mother – Jenney L. Rockman – is a veteran of the Air Force who served during the first Gulf War.

“Originally I didn’t want to join,” Alexis said. “My Mom kind of forced me into it. She told me, ‘Come on, just one year! It’ll be fun. You’ll make friends.’”

Alexis gave in her sophomore year, and to her surprise she fell in love with the JROTC community at East.

“I ended up absolutely loving it, and it’s been one of the best things I could have ever done,” she said. “It’s more than just learning about the military and all that. It’s kind of like a family, and I have all my friends in it.”

Alexis since fallen in love with something else: the idea of following in her mother’s career footsteps within the Air Force. She’s working to earn an ROTC scholarship for college.

“I think it helps keep them focused and teaches them how to make good decisions and take pride in what they do,” said Rockman. “High school is a hard time in life where you’re figuring out your personal identity and becoming an adult. I think JROTC really (helps with) that.”

Alexis – along with a sister who is also interested in military service – represents what would be the fourth generation in her family to serve the United States. Her grandfather served in Vietnam in the Air Force, while a great uncle was a colonel and two great grandfathers served during World War II.

“I think there’s just that sense of patriotism to serve your country in the time that it needs you (in our family),” Rockman said. It’s a continuity in our family of serving our country, and it’s a tremendous source of pride.”

For Denver’s annual Veterans Day parade on November 11, Alexis marched alongside students from every JROTC chapter in Denver Public Schools. As she works toward a career in service like so many generations before her, she recognizes that JROTC is not an organization exclusively for students looking to get into the service. Rather, it is about honoring the traditions and the history of those who have served on all days of the year, not just Veterans Day.

“Veterans go through a lot,” she said. “They experience something that’s traumatic in some cases, and it’s important that we recognize that it’s not always the easiest thing. We should respect them for that, and it’s a good thing there’s a day to really do that and respect them and understand what they’ve gone through.”

“I think some don’t always remember the ultimate sacrifice (many veterans) have made for their country, and how important is it to recognize that service to protect our nation,” Rockman said.