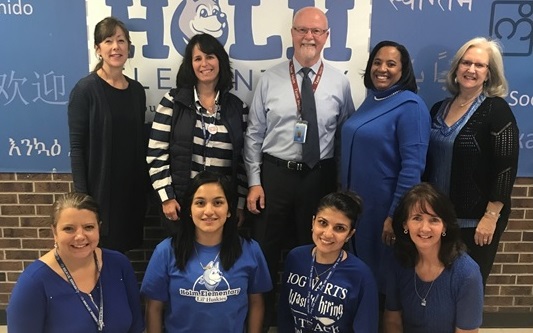 A woman whose family had recently moved to Colorado from Texas stepped into the tidy front office of Holm Elementary School in Southeast Denver on a recent Monday morning, asking how to enroll her children. And Shawna Nordlander, the front office secretary at Holm for more than 12 years, knew just how to help.

After asking a few quick questions to better understand what the woman needed, Shawna gave a simple explanation of the area’s enrollment zone, including some highlights of programs at nearby schools (Samuels and Joe Shoemaker), and how to enroll online through schoolchoice.dpsk12.org . The conversation easily could have ended there, but Shawna also offered some materials to help the woman learn more about the schools in the zone, and offered her phone number, in case any questions came up while completing the application — even for the woman’s older kids enrolling in middle and high school.

Then, Ana Maria Sepulveda walked into the office, carrying several plates of homemade tres leches cake to share. When she noticed a visitor in the office area, she warmly called out, “Do you know about tres leches cake? Do you want some? I’ll bring you a piece!”

“That’s Ana Maria!” said Principal Resident April Milow . “She has been a parent here; she fills in as a paraprofessional; she’s a substitute teacher; she runs our bilingual parent committee, and she also does English classes for our second-language parents. She’s just the welcoming committee.”

People like Shawna and Ana Maria make it easy for families to feel at home at Holm. “It’s just that feeling you get when you’re in the school,” April said. “We say it’s our home away from home, and we really want everyone to feel that way. And if someone comes in and we’re not meeting their needs, we ask for that feedback — how can we meet your needs, what are we not doing?”

Holm is a richly diverse school community. About 82% of students are eligible for free- or reduced-price lunch, and 51% of students are English learners. Enrollment at the school is about 55% Latino, 20% white, 16% African American and 5% Asian/Pacific Islander, and includes families who speak 23 different languages. “We’ve been blue or green (the two highest ratings) on the SPF (DPS’s school-performance scorecard) since the beginning. It’s all about living with the growth mindset – that everybody can succeed, no matter what,” April said.

Jim Metcalfe , Holm’s principal for more than 20 years, thinks that a big part of serving such a diverse community is about making families feel welcome. “We have an open-door policy here as far as parents coming to visit. You never need an appointment to come visit and be a part of the school.”

He added, “I don’t think we do anything that everybody else doesn’t. I just think we have enough parts that it works. And we’ve weeded out stuff that doesn’t work, we’ve tweaked stuff that does work, and we’ve got good people to implement it.”

Those good people Jim refers to — like teachers, paraprofessionals and front office staff — tend to stick around. April started her 20-year career at Holm as a paraprofessional when her four children attended the school, and went on to be a fifth-grade teacher for 17 years before shifting into a leadership role as assistant principal two years ago.

“When we look at our staff, the average teacher has been here for 10 years,” April added. “Many of our front office staff have been here since their kids were students here. We even have a teacher who went here as a student — and her daughter is now here as well.”

The time and care that Holm staff have put into making their school a warm and welcoming place for all families is reflected in the enthusiastic support the school receives from its community. “This is our first year partnering with DPS’ Parent-Teacher Home Visit Program and we’re excited,” said April. “Some of our parents were really eager to be the first ones to get home visits. They’re supposed to last about 20 minutes, but some of them have been lasting an hour-and-a-half.”

In addition to the bilingual parent committee, run by Ana Maria, the Holm Helpers serve as the school’s PTA. “Parents are always welcome to come in and volunteer after completing the quick background check through the district,” April said. “We had so many volunteers this year, we didn’t know where we were going to put all of them!”

And while Jim doesn’t think there’s a magic formula to what they’re doing at Holm, he does feel certain that the most important thing is just to keep trying to do better. “It doesn’t mean we don’t have fails, but we just keep on going. And if we fail, we’ll just start again.”

Thanks to the entire Holm team for modeling what collaborative teamwork can achieve to ensure that every student thrives.