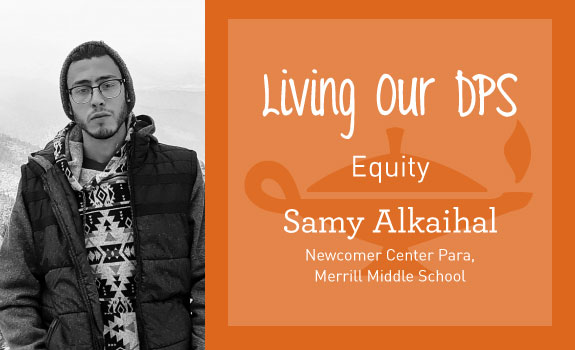 “Samy joined our Merrill family at the beginning of the second semester. He dived right in and has been an amazing support not only within our newcomer center, but within the whole school. Samy wanted to get involved with coaching this year and was given the position of the boys’ soccer coach. The Shared Core Value he demonstrated was Equity. Never in my four years of working as a teacher in the newcomer center has any NC student been able to be involved in a sport.Samy advocated and helped several Newcomer students get everything they needed so that they could be a part of tryouts. He even took them home afterwards and was happy to do so. Once the final roster came in, three of our NC students were on it! Samy was able to break down some of the barriers that have prohibited all students from being involved in afterschool activities. He created a positive change that I hope will continue not only at Merrill, but within every school in DPS.”