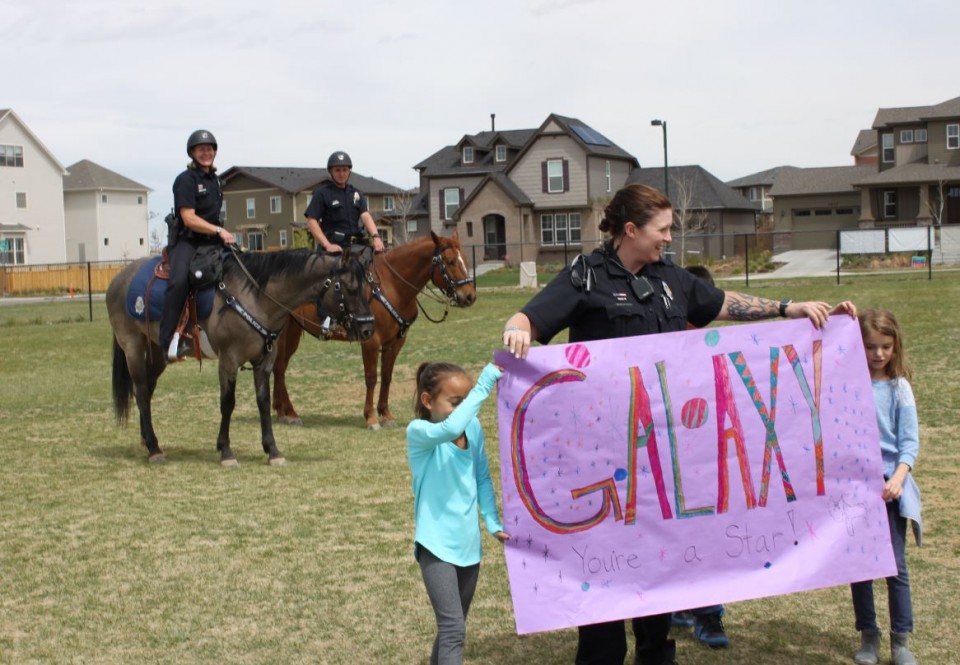 Isabella Bird students reveal their chosen name for the newest DPD horse with help from the Mounted Patrol unit officers.

The Denver Police Department (DPD) is proud to have many “star” officers on its force. Now, thanks to the third- and fourth-grade students at Isabella Bird Community School, the Mounted Patrol Unit has a “Galaxy.”

The elementary students had the distinct honor of naming the newest horse to join the DPD’s Mounted Patrol Unit. The nearly-six-year-old American Quarter Horse with “Grullo Roan” coloring, marked by his unique black-tipped ears, is a gentle and kind-hearted animal that is very cautious and thorough when out on patrol.

Two weeks ago, the students greeted the gelding and submitted to the Mounted Patrol Unit a list of their top names, which included: Justice, Serene, Domino, Comanche, Winter, Izzy B Horse, Mr. Mustache, Galaxy, Hero, Lucky and Cloud.

The DPD officers selected three of the names – Lucky, Justice and Galaxy – as the final choices to be voted on by the students, who unveiled their chosen moniker for the horse Tuesday afternoon.

“It was really cool to get to name a police horse. I’ve never ever ever done that before,” explained Isabella Bird student Xavier. “I used to be kind of afraid of horses, but once I started to get to know the horse, he seemed really kind and I’m starting to get used to horses now.”

“I was really excited because I had a feeling it was going to be Galaxy after we voted. I really like that name because the color of his fur is kind of like the color of our galaxy,” excitedly added classmate Aralynn.

Betty Robertson, a retired school teacher and longtime supporter of the DPD, has donated equestrian officers for many years and, to honor her generosity, the naming rights of the new horse are traditionally given to DPS elementary students.