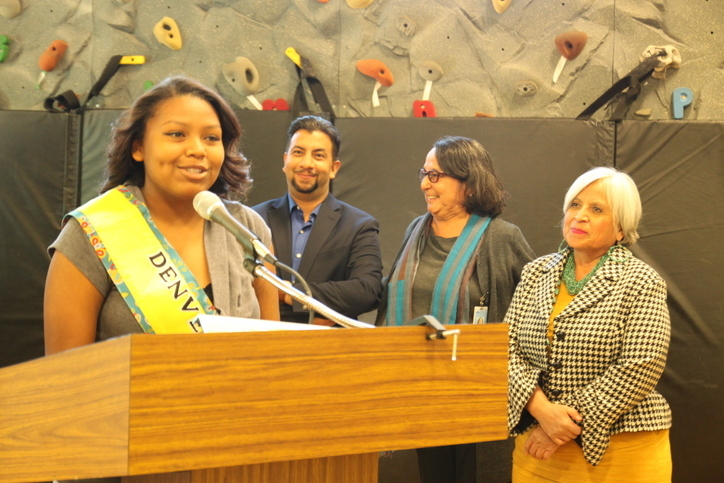 City Council members unanimously approved the proclamation earlier this month to honor the vast contributions of indigenous peoples to the Denver community. The first official Indigenous Peoples’ Day in Denver was Oct. 10, 2016.

Lopez, who authored the city’s proclamation, presented an official copy to DPS Board of Education members at Thursday’s regular monthly meeting. Board member Rosemary Rodriguez accepted the proclamation, calling it a monumental day.

“On behalf of Denver Public Schools, we too recognize the contributions made by indigenous peoples in science, philosophy, arts and culture,” Rodriguez said. “Denver and the surrounding communities are built on the ancestral homelands of numerous tribes.”

Several DPS students who participated in the City Council discussion of the proclamation on Oct. 3 also spoke to school board members, thanking them for their recognition in both Lakota and Navajo languages.

“Indigenous Peoples’ Day is something wonderful to me. It’s a day when I can celebrate my people and we can celebrate our strength and resilience,” said Joi Lynch, a junior at East High School and president of the school’s Native American Club.

Other students who spoke were Simako Marshall, a senior at West Early College, and Anpa’o Locke, a senior at the Denver Center for International Studies.

“If you look at the history books, or if you get on Google or Wikipedia, the founding of Denver starts with the Gold Rush,” he said. “But this city was founded at the confluence of the Platte River and Cherry Creek because there were seasonal encampments by the Arapahoe and Cheyenne people.

“We want to make sure our kids and our city understand history, not as told by the victor, but as is. The worst thing you can do to a population, to any group, is to make them invisible,” Lopez added.

For more information and to read the proclamation, click here.