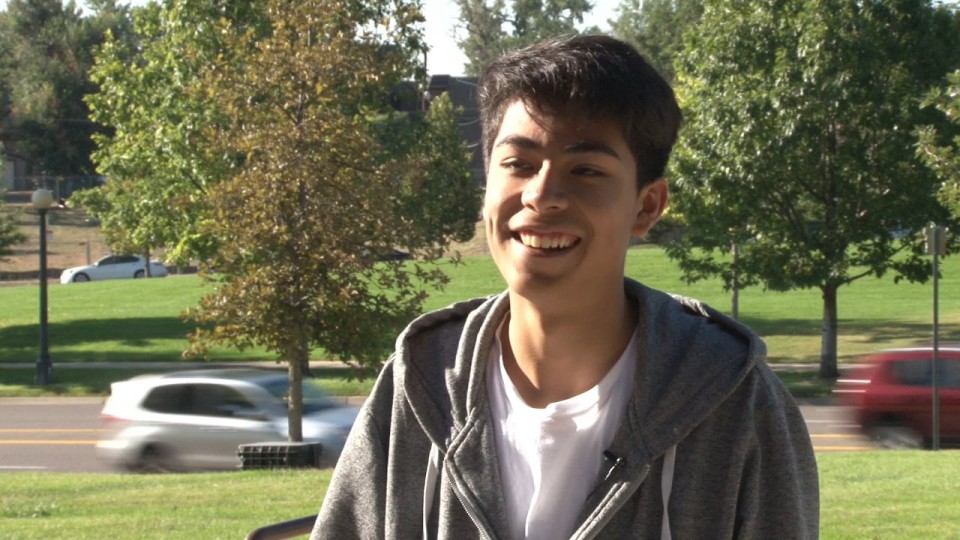 “I remember Ms. Caldwell coming up to me and asking, ‘Hey, people from the district want to videotape students doing the 8th Grade College and Career Fair, are you down to do it?’ And I was like, ‘I guess, I might as well.’ And it was really awkward because I was skinny and gross,” he said, laughing.

During that interview and the following video shoot, Carlos – then an eighth grade student at Skinner Middle School – guided DPS Features through the National Western Complex as he looked at a myriad of colleges and careers potentially available to him in the future.

“It helped out a lot, because I got to see all of the different colleges that were there,” Montoya said. “You at least get to see what’s out there for you, and what you can apply yourself to be in over the next four years.”

Four years later, Carlos – now a senior at Denver North High School – accepted to another interview with DPS Features (this time a bit more willingly) to talk about what has changed – and what has stayed the same – since that first interview four years ago.

“I didn’t really know what I wanted to do then. I wanted to be in sports med, and I still kind of do,” he said. “But when I was there, I talked to the person at the CSU desk from Admissions. She gave me her card, and I’ve followed up with her over the years about possibly going to CSU.”

Building off of that college and career fair four years ago, Carlos says he has jumped at most of the opportunities his middle and high schools have provided him to feel less anxious – and more informed – about the future.

“When I was at Skinner, we went on college tours on weekends and during the summer. When I got here, I started taking college classes my sophomore year. This year, I have a teacher who’s more of a college professor than a teacher,” he said. “I feel like I have an edge on what’s open to me.”

College seemed so scary four years ago. Now, it’s just the next step – one he’s excited to take, no matter how it looks.

“Ideally? I want to go to Michigan, find out what I want to major in, graduate … then come back here, start a family, grow old, retire, stuff like that,” he said, laughing.