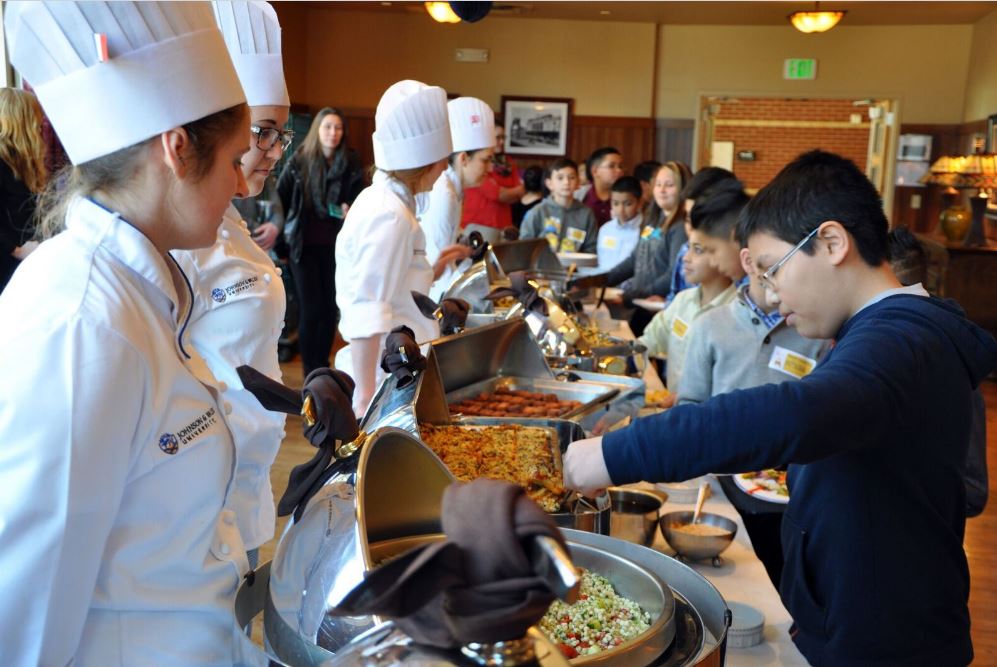 “Ooohs” and “aaahs” emanated from the third-, fourth- and fifth-graders as they listened to a description of the vegan feast awaiting them before the Thanksgiving 2016 break. The all-vegan meal was prepared for Ashley Elementary students by students in Adam Sacks vegan cuisine course at Johnson & Wales University.

Johnson & Wales University is changing the way the world eats, and associate instructor Sacks believes one way to do that is by reaching out to younger generations.  Approximately 88 percent of the children who attend Ashley Elementary qualify for free and reduced lunch, which is significantly higher than the state average (42 percent). Sacks feels that knowledge and access to healthy eating options is vital to all children, regardless of income.

“I gave my students four culinary objectives: fun, familiar, educational and wow. I wanted the kids to feel special, be engaged and try vegan versions of food they’re familiar with, all while planting a seed for higher education,” explained Sacks.

His students rose to the challenge and were inspired in the process.

“The best part was doing it for the kids!”said Zach Doler, student at Johnson & Wales. “A lot of these kids don’t get to try vegan food normally. I’m glad we can give them the chance to see what else is out there.”

From the looks on the children’s faces, they accomplished their mission.

“If vegetables always tasted this good, I would eat them all the time,” exclaimed fifth-grader Anthoni Martinez.

“That’s not even meat – can you believe it?” added fourth-grader Adrian Saavedra.

“I love how they made the effort! I’ve never had vegan food, and I love it. My favorites were the sweet potato and the stuffing,” said fifth-grader Mia Balderas.

“Mostly, I like it all. I bet the cooks are really good at this!” piped in fourth-grader Brooklyn Collins.

“I think it’s beautiful. Everyone was so welcoming to the students.” said Joyce Archuleta, secretary at Ashley Elementary. “Some kids may not even have a dinner like this, with the full-table setting, it’s just beautiful!”

“I’m a vegan, so I’m always talking to the class about vegan food. I advocated for them to come because it is an opportunity to have an authentic vegan feast,” said Amber Craig, a fifth-grade teacher at Ashley Elementary. “It gives the children more exposure to different cultures and different types of food…really good food that is not meat-based or processed.”

At the conclusion of the event, each child received a goodie bag with a seaweed granola bar, healthy eating literature and a recipe to encourage them to continue to explore the way they eat.