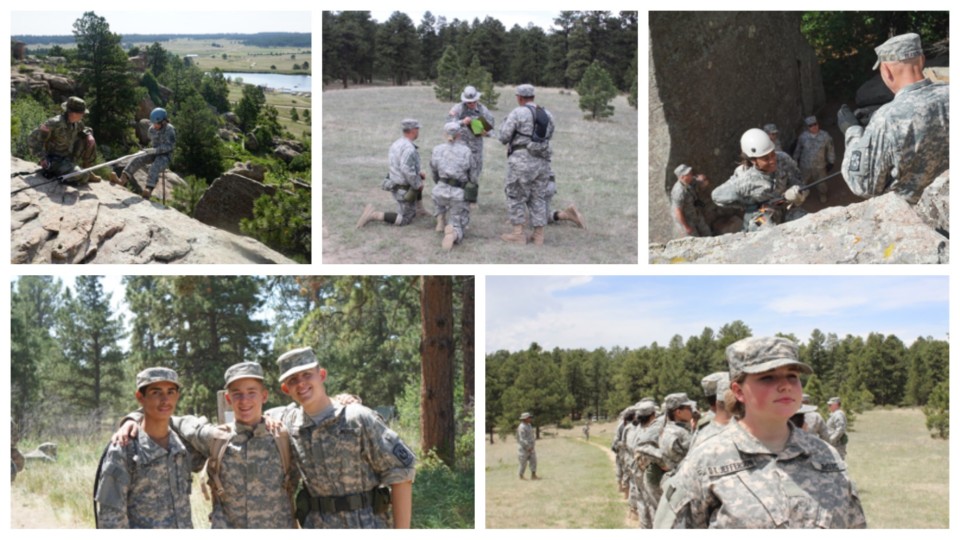 “So, Cadet Mosley, when you need to slow down, how are you going to brake?” gently asked Master Sergeant Mark Beasley, as La’voncea Mosley, a sophomore at South High School stood on the edge of a cliff in Kiowa, Colo., safely secured in a rappelling harness, wearing a helmet and hiking boots with a thick double rope trembling between her gloved hands.

Conquering fears emerged as a solid theme in the week-long JROTC Cadet Leadership Challenge camp, held in the wilderness of Colorado, sponsored by the U.S. Army.

As other cadets cheered her on, her hesitant smile lit up from within, resulting from a sudden realization of “yes, I can do this.” Her training kicked in as she cautiously began to descend down the mountain, listening to the sound of her instructor’s voice coaching and encouraging her along the way, where another instructor met her at the bottom with a celebratory high five.

Asked afterward about her experience, she shared with a beaming grin, “At first, it was so scary, and I was nervous. I’m extremely scared of heights, but my instructor helped me get over that fear. And I’m glad I did, because once I started bounding down the mountain, it was a lot of fun. I’ve never done anything like this.”

More than 100 DPS students had the chance of a lifetime to attend the immersive camp this summer, where they learned critical wilderness survival skills, put their leadership and physical abilities to the test, and learned to work with total strangers. Perhaps most amusing in the age of wifi and smartphones, students even learned how to find their way back to camp in unfamiliar terrain by way of a compass for navigation.

The week was full of firsts. Several of the students had never felt the physical exertion of paddling a canoe before, and by the end of camp, they were competing in intense figure-eight races across the pond. Many had never slept in a tent, but quickly became comfortable in the campsite and “dealt with all the bugs.” Students applied learning from demonstrations about how to build fires and shelters together, united as a squad in the woods. Far away from the light pollution of the metro area, students were amazed and delighted at the vast night sky illuminated by stars.

“A lot of the kids are afraid of the water, and we train them on how to use canoes and to be more comfortable. They also learn how to rappel, and gain confidence in knowing they can do it,” explained Lt. Col. Kevin Black, Deputy Director of DPS Army Instruction.

Another theme was communication with teammates, with the added complexity of being placed on competition teams with complete strangers.

“Students are intentionally integrated with kids from other schools across Colorado and Arizona. They’re going to have people that they don’t like all that much in whatever career they’re in, and these types of experiences force them to learn how to work as a team,” explained Lt. Col Steve Osterholzer, DPS Director of Army Instruction.

“That’s right,” agreed Cadet Herbest. “I didn’t know them before this trip. This camp is teaching us leadership, responsibility and communication.”

“We’ve been challenged with socialization and stepping up to the plate. It’s been hard, but we’ve worked through it on multiple occasions this week,” added Cadet Steven.

When asked about their favorite event at camp, cadet after cadet answered that rappelling was their personal highlight. “Most of our cadets have never rappelled before this week. You’ll see kids whose knees are shaking, white knuckled with fear, and it might take them 20 minutes to get down the rope, but they get all the way down and they look up and say with such enthusiasm, ‘I did it!’ By the end of the day, they are zooming — going again and again and again. That’s the reason we do this,” said Lt. Col. Osterholzer.

Students are in the very best hands: DPS and the U.S. Army brings 50 instructors to facilitate the camp, each of which served overseas in the armed forces. Students are able to learn from the years of experience these men and women bring as they are taught how to safely rappel down mountains.

Conquering fears, along with learning the true value of teamwork — recognizing each other’s strengths, overcoming differences, giving constructive feedback and combining them in a way to lead to a shared goal — are crucial lessons they will use all their lives: in college, in the workforce, with their families.

Leadership is one of many ways JROTC prepares students for college and career. The program also teaches critical skills such as resume writing, financial management, test-taking strategies for college entrance exams, and applying for government financial aid and scholarships. To learn more about opportunities available for DPS students, visit collegeandcareer.dpsk12.org.