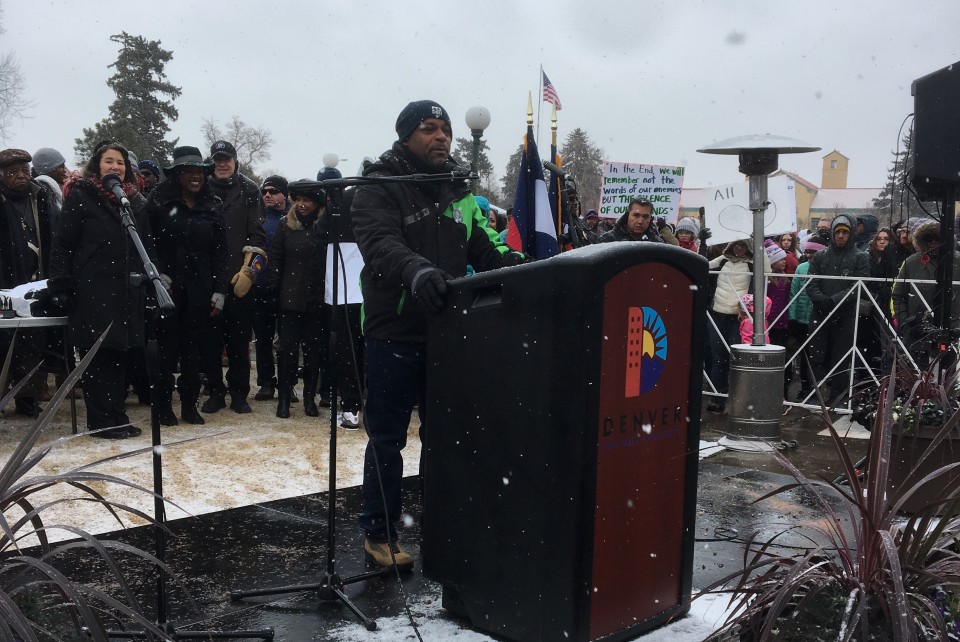 DPS educators and students came together with other Denver community members on Monday to commemorate the late Martin Luther King Jr. at the 32nd annual MLK Marade (March and Parade), the only one of its kind in the nation.

Marchers walked the equivalent of a 5K from the Martin Luther King Jr. “I Have a Dream Memorial” in City Park, south on Esplanade Street and west on Colfax Avenue to Civic Center Park in downtown Denver. Participants participated in a program immediately following the Marade in Civic Center Park’s Greek Theater.

“The goal is for Team DPS to publicly come together and affirm our deep belief in, and support for, Dr. King’s ideals of opportunity and equality for all members of our community. These ideals are at the heart of public education,” said DPS Superintendent Tom Boasberg, who marches annually in the Marade.

“It’s important to show that we can all come together and demonstrate that we value every member of our community. Going forward, we’re all going to have to work together to build the kind of community we aspire to.”

Student groups including the drum line from Martin Luther King Jr. Early College, the Manual High School basketball team and student leaders from Denver Center for International Studies at Montbello were in attendance during the Marade and at commemorative events around Denver.

A brief program at City Park prior to the Marade featured words from Denver Mayor Michael Hancock, former Denver Mayor Wellington Webb and Congresswoman Diana DeGette, along with musical performances. The program in the Greek Theater concluded the events with a celebratory drum line and a ‘Thank You’ to participants.

“The Marade this year was incredible! I was thrilled to see our educators across DPS turn out to support the ideals of Dr. King and his vision for equality, service and commitment,” said Janet Damon, DPS library support specialist. “From community organizations to sororities and fraternities, our educators are activists and leaders. This was truly an inspiring day!”

“With a drive for justice, opportunity and equality for all, Dr. King has left an indelible mark on the social conscience of these United States,” he said. “And today, and every day, we strive to make good of his legacy and follow his example as the march for fairness, compassion and civil rights stretches on.”