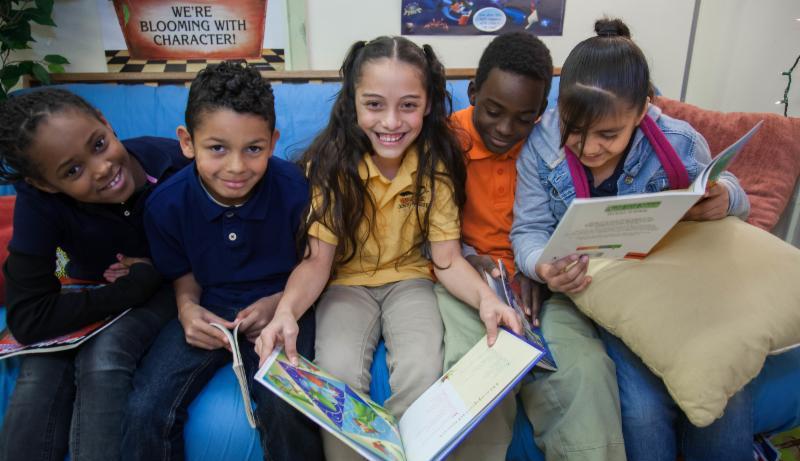 Students dig into some books at John Amesse Elementary.

“As the state legislature comes near the end of its session, education funding in the school finance bill the legislature is considering will again not keep pace with inflation, resulting in another cut in real dollars for our schools.” 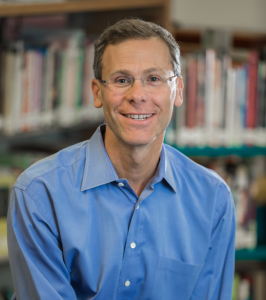 As Colorado’s economy continues to thrive, the contrast between our economic growth as a state and our continued cuts to our public education system grows more stark. We are grateful for the fact that we have one of the strongest and fastest-growing economies in the country. Yet, we continue to be among the bottom 10 states in the country in our investment in K-12 education.

This is a political problem, not an economic one, and we need to address it.

Currently in Colorado, we fund our schools at a level $2,500 per student below the national average. This has enormous consequences on critical matters such as class sizes, student opportunities and competitive compensation for our educators in a city that grows more expensive by the month.

As the state legislature comes near the end of its session, education funding in the school finance bill the legislature is considering will again not keep pace with inflation, resulting in another cut in real dollars for our schools. DPS receives roughly $1,000 less today than what we would have received had funding over the last seven years just kept up with inflation, a budget cut known as the “negative factor.”

We are strongly urging the legislature to take immediate steps to restore school funding and to take the necessary long-term steps to address the legal constraints on state revenues, including the state’s TABOR and Gallagher amendments and its Hospital Provider Fee mechanism. All of these provisions combine to mean that Colorado will be giving taxpayers refunds at the same time it maintains the “negative factor” budget cuts to schools.

Within this context, the DPS Board of Education reviewed earlier this week our proposed 2017-18 budget. The budget continues its efforts to push more money to schools and increase flexibility at the school level to meet the individual needs of each school. Spending at the central level for functions like technology support, budget and human resources will decrease from 5% to 4% of the district’s budget, which is one of the lowest proportions for central spend of any city in the country.

Thanks to the 2016 mill levy, more than $30 million additional dollars will be allocated to schools next year for resources such as expanded whole child supports and increased funding for our highest-need students. We are grateful to Denver’s voters for providing this funding.

Nevertheless, it will take all of us coming together to generate the public and political support to make the long-term changes our state needs. 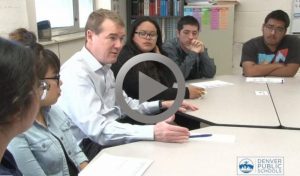 In March, students at Bruce Randolph School sent President Donald Trump tweets expressing worry about his immigration rhetoric. Last Friday, Senator Michael Bennet — a former DPS superintendent — met with these students to discuss immigration enforcement and policies, and reassured them that educators are behind them.

“You are in a school district that cares a lot about you. … This is a place where you can ask for help.”

Watch this DPS Features video to see more from this visit.

Members of the Denver Public Schools Board of Education have unanimously declared their commitment to protecting the legal rights of all students, regardless of immigration status, national original, religion or race, with the Safe and Welcoming School District resolution. Learn more about DPS’ commitment to protecting our students and their information on the Safe and Welcoming School District webpage. 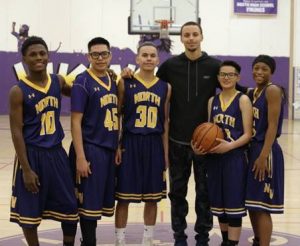 Curry was at North High School for a photo shoot and interview with GQ while in Denver for a game against the Nuggets. The extremely shocked and excited players traded handshakes and introductions with Curry before he challenged them to the longest game of H-O-R-S-E in their lives.

Instead of H-O-R-S-E, he suggested a game of S-E-S-Q-U-I-P-E-D-A-L-I-A-N, the 14th longest word in the English dictionary, defined as “polysyllabic” or “characterized by long words; long-winded.”

Watch the video of the match, posted by GQ. And see news coverage about the visit by 9News, Denver Post and Fox31.

Curry ultimately won the challenge, but he added, “I can always work on my game so it was nice to get some shots up with them.”

Long-time Employees Honored for Years of Service to DPS 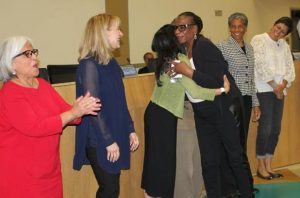 Members of Team DPS who are celebrating 25, 30, 35, 40, 45 or 50 years with DPS were honored at Thursday’s Board of Education meeting. Of the 225 team members recognized, 12 educators are celebrating 45 years with the district and three have been with us an amazing 50 years!

Congratulations and thank you to Valerie Kluver, Gordon Heaton and Penny Ware-Ashby, who are all now substitute teachers and are each celebrating half a century with DPS. Gifted and Talented team member Rallie Ginsburg — who was recently highlighted on 9News for her continued commitment to DPS at 100 years old — was also recognized for 45 years of service with DPS. And Superintendent Tom Boasberg was given an anniversary pin to celebrate his 10 years of service with the district.

See the full list of honorees here. Congratulations to all of our long-time team members for your continued service to DPS and our kids!

April 27:  ED Talk: Black. A play and discussion about race in our community