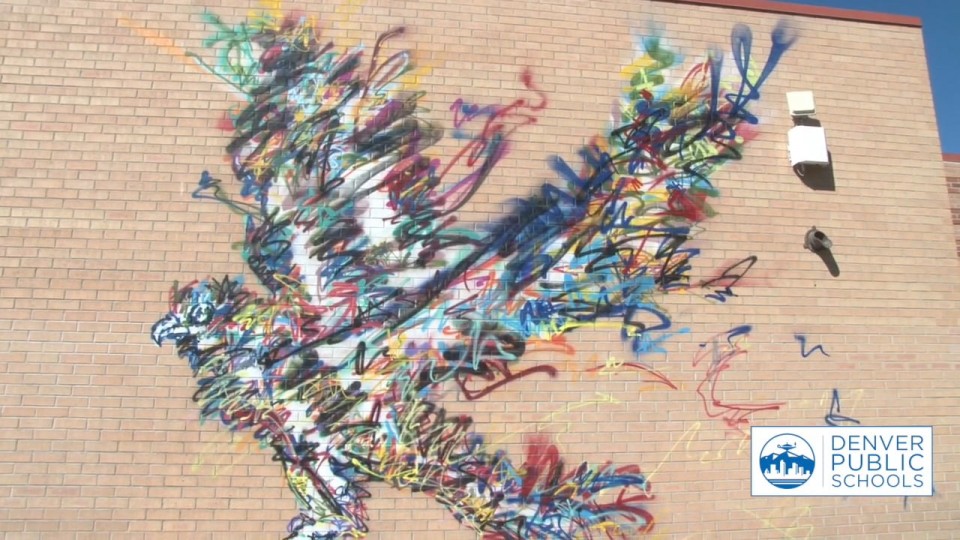 Ahead of the 2017-18 school year, Eagleton Elementary School principal Lee Rains Thomas had a big challenge on her mind: increasing attendance.

“We struggle with getting kids to school and engagement,” Thomas said. “We have really thought about what we want to do for our kids and our community to build a strong school where they feel excited and want to be engaged.”

In Thomas’ case, an answer came with a phone call from Florida. It was an artist from the Miami area with The RAW (reimagining the arts worldwide) Project, a community service effort connecting global artists to local schools with the goal of beautifying campuses.

“They called looking for schools that needed a facelift, and as a way to bring urban art to the school,” Thomas said. “Before I knew it, artists started showing up from around the world just after Labor Day.”

The RAW Project – showcased in national publications like NPR – is organized by Robert de los Rios and Audrey Sykes, two artists with parents who worked in education.

“We want to give back because we’re products of this system,” de los Rios said. “We think it’s only right for us to give future generations options that we had growing up. If we are not here to help you, then what are we doing?”

The project brings in artists from all over the world – France and Mexico included – to connect their culture and art to students who frequently have similar stories. As mural art is often frowned upon or seen only as graffiti in other parts of the world, the project is often the only chance a foreign artist specializing in mural painting would have to share their art publicly – and in the case of their stay in Denver, personally.

“My school has a lot of people who are from Mexico (and) speak Spanish,” Thomas said, standing in front of a stunning portrait of a young girl with her hands covering her eyes by renowned Mexican artist Paola Delfin. “Paola really connected with our kids. As she was designing, she took pictures of a lot of kids. Just the other day, a student asked me, ‘Who is it? Who’s that girl?’ and I said, ‘She’s all of us. The hands of one child, the nose of another. The lips of one. It really is all of us. And I think the kids were really just in awe of that.”

Meanwhile, Thomas says the school has seen an increase in attendance and engagement since the mural painting project began in late summer 2017.

“Hope. I think all the art, in general, gives our community hope, and inspiration,” Thomas said. “I hope they’re feeling a deep sense of pride in their school. This is their art.”

Including Eagleton, The RAW Project artists painted at three different Denver Public Schools campuses. They have moved onto other cities, but hope to be back in other parts of Denver in the coming years.

“We want to thank DPS for the embrace they’ve given us. We hope we made you proud,” de los Rios said.